Todd Drezner’s first documentary, Loving Lampposts: Living Autistic, was inspired by his son Sam. It screened at the United Nations for World Autism Awareness Day, won Best Documentary at the Peace on Earth Film Festival in Chicago, won the Social Consciousness Award at Vision Fest in New York, and was nationally released on DVD and VOD by Cinema Libre Studio.

Before he started producing his own films, Todd worked as an editor of several award-winning documentaries that have aired on PBS Philadelphia, the cable network Ovation TV, and in theatrical release. When he is not working on documentaries, Todd produces and edits videos for large companies and non-profit organizations. 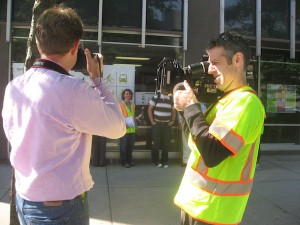 Ben Wolf is a cinematographer, director, and occasional editor and teacher.